The TOP 6 Presenters Search on 3 contestants visit the Kingdom of eSwatini.

Six contestants are left in the competition and true to the nature of the Expresso Morning Show the contestants have to do travel challenges. In this episode of Presenters Search on 3 the contestants travel to the pristine Kingdom of eSwatini, previous known as Swaziland.

“We arrive in eSwatini and this place is pure heaven” – Jarrad Ricketts
“There are beautiful landscapes everywhere you look, just amazing” – Nathanael Davids
“eSwantini is so beautiful” – Jamie-Lee Domburg
“There’s rural feel to it” – Thato Moshoehoe
“We arrive and this place is phenomenal, it’s like I’ve been taken away to someplace between valleys and mountains, and there’s even a river running here” – Deen Woodman
“We arrive and I’m just looking around at this beautiful landscape” – Kuhle Adams.


When they arrive at the Silverstone Lodge, just outside Mbabane, they are welcomed in the Kingdom by Linda Nxumala and Melusi Dlamini, CEO and Communication Officer of the eSwatini Tourism Authority. The contestants are divided into two teams for challenges; Team One is Deen, Nathanael and Thato and they have to explore some of the art and culture that eSwatini has to offer. Deen meets up with two woodcarvers who teach him the craft they’ve been practising for years. Nathanael meets up with the founder of Gone Rural and found out how they use grass weaving to uplift their community and Thato meets up with one of eSwatini’s biggest musical exports – Sands.

Team Two consists of Jamie-Lee, Kuhle and Jarrad and their challenge was to find out more about the traditions and culture of the Swazi people. Kuhle meets traditional cook and learns how to make a truly Swazi meal. Jarrad meets a traditional healer and Jamie-Lee learns why dancing is important to their culture, then learns a few steps herself.

Presenter Search on 3: Expresso Edition is still a competition and elimination is part of the game. The judges Dr Musa Mthombeni, Thando Thabethe and Roger Goode watched the raw inserts and decided the fate of one more contestant. Sibebe Rock is the largest granite rock in the world and the venue for this episode’s elimination. 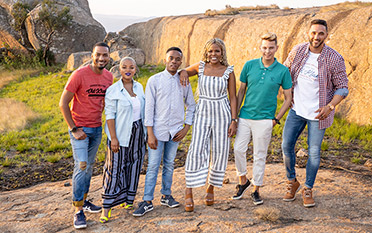