After the huge success of the nationwide Presenter Search on 3: Expresso Edition auditions it is up to the judges to make the tough call to see who will be joining Olwethu Nodada from Cape Town, Thandi Mhlongo in Durban and Nathaneal Davids in Joburg.

From thousands of hopefuls, only ten will make it through to the next round and get to compete in a series of challenges designed to test their presenting skills. With three positions already filled and seven remaining Dr Musa Mthombeni, Roger Goode and Thando Thabethe will reveal who made it through in an exciting live broadcast on Wednesday 4 September at 7:30pm on SABC3. 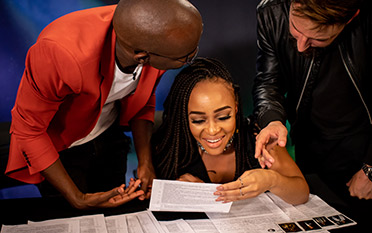