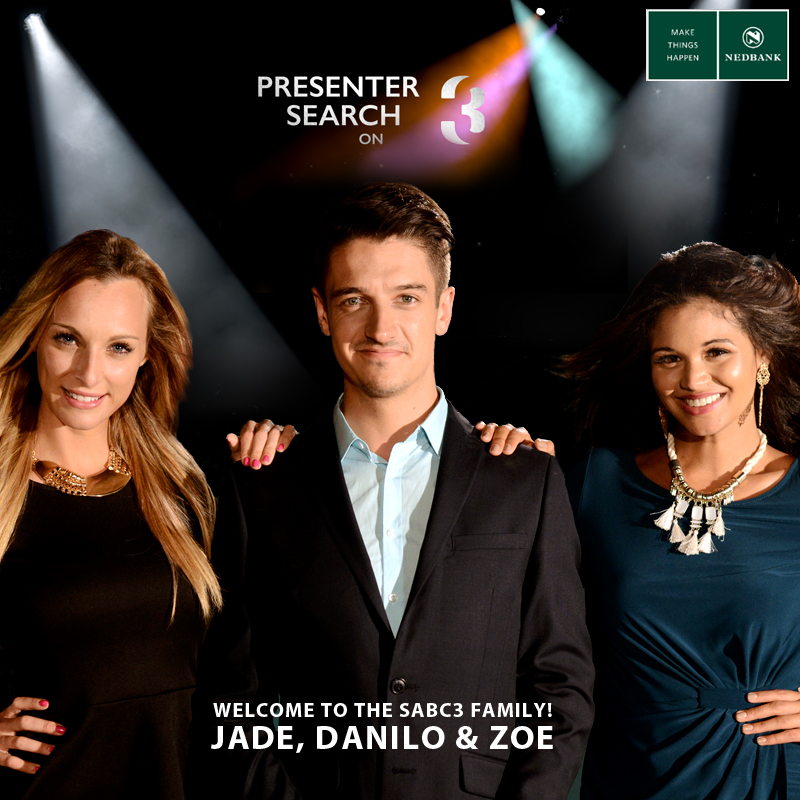 The search for SABC3’s top new presenters has come to an exciting conclusion. After 12 weeks of challenges, the final five contestants – Christopher Jaftha; Danilo Acquisto; Jade Hubner; Khanya Siyengo; and Zoe Brown - faced off against each other in a nail-biting Grand Finale on the tropical island of Zanzibar.

In a grand pool-side ceremony, the Top 5 waited anxiously for the judges to reveal who would be stepping into the spotlight as the three winners, and which presenting gig they would each get.

First announced was 25-year old Zoe Brown as the winner who will shine on live television by joining Expresso. The next winner to be revealed was Johannesburg-born Danilo Acquisto, who will work on the brand-new weekday afternoon show Afternoon Express alongside judges, and now co-hosts, Bonang and Jeannie. The third and final winner to walk away with a presenting spot on the glamorous Top Billing, is 23-year old Jade Hubner.

SABC3's Head of Bouquet, Aisha Mohamed said, “Our top three finalists have really exceeded our expectations this year! It’s not easy finding a presenter, let alone three who have all the qualities to appeal to our vast audience. We wish Zoe, Jade and Danilo much success as they pursue their dreams on Expresso, Top Billing and Afternoon Express. May their careers continue to grow from strength to strength."

Not only have these three won dream presenting jobs, but thanks to the show’s sponsors, each of them will get to drive a luxury Mercedes-Benz for a year; receive R10 000 from Nedbank; and with a presenter needing to look stylish at all times, what better way than with a R50 000 Woolworths gift card to take care of all their fashion needs.

Zoe Brown’s career goals are to build real, lasting bridges between people and communities. With her degree in International Relations from Stellenbosch University; her career growth as a radio presenter, starting from campus radio and moving on to a national radio station; and now as a Presenter Search on 3 winner, she is well on her way to making her dreams come true.

Zoe said: “Winning still feels surreal. I was entered back into the Top 30 as a wildcard. Never in my wildest dreams did I think I would make it all the way to the end. What has been extremely heart-warming throughout this entire journey has been the incredible support that I’ve received from the viewers. I hope to use this platform and be able to make everyone that rooted for me proud. This is an absolute dream come true!”

24-year old Danilo Acquisto is no stranger to the presenting world, both on radio and the small screen. Danilo hosts his own slot on Goodhope FM, and after presenting on the SABC2 youth show Hectic Nine-9 for four years, he has moved on to behind-the-scenes content production across many media platforms. But it seems that the spotlight has landed firmly on him and Danilo belongs in front of the camera.

Responding to his victory, Danilo said: “After three months of stress, anxiety and a lot of laughs, I am very grateful to be a new host on Afternoon Express. I look forward to making magic on SABC3. A big thank you to all the South Africans from all walks of life, who supported and encouraged me.”

It’s difficult to find someone who has as much energy as Capetonian Jade Hubner. This self-confessed tomboy has grown into a beautiful, fit and talented young woman who has mastered everything she has tried her hand at. Whether it be athletics, music or entrepreneurship, GI Jade has made it all her own. Winning on Presenter Search on 3 is an important step on her way to stardom.

Jade’s reaction to winning the Top Billing presenter position: “It’s hard to believe this is actually happening. I used to joke that if you had to match my personality to a job, it would be as a Top Billing presenter. Well, as it turns out it wasn't a joke. It was my destiny. I am overwhelmed with joy and humbled and grateful. I am so excited for the future and cannot wait to get started.”

Speaking on behalf of Nedbank, Vanessa Singh, Marketing Executive of Retail and Business Banking said, “Nedbank is extremely proud to be the headline sponsor of Presenter Search on 3, it clearly demonstrates our commitment to making things that really matter to South Africans happen."

“We applaud all the contestants for embracing this life changing opportunity and congratulations to the top three,” said Singh.

It’s been an explosive three months, where the formidable panel of celebrity judges - Bonang Matheba, Jeannie D and Phat Joe – had the arduous task of choosing potential talent in nationwide auditions. From thousands of hopefuls, only 30 were selected to continue in the competition to be one of the SABC3’s new presenters.

The 30 contestants were put through their paces in what it takes to be on-air, with mentorships from some of South Africa’s best in the television business.

These 11 contestants were put through the wringer in the battle to win a coveted position and step into the spotlight as one of three new faces on SABC3. With weekly eliminations, the pressure was on for them to deliver the perfect presenting package; top-class links; enlightening travelogues; and outstanding live performances.

Presenter Search on 3 is proudly brought to you by Nedbank.

Throughout the series, the potential presenters have been dressed by Woolworths to ensure that they’re always on trend and look stylish. The Top 11 were transported in the lap of luxury by Mercedes Benz whilst on terra firma, and Mango airlines flew contestants and crew speedily between both national and international destinations. When on the road, the contestants called Protea Hotels home. And if they’re missed by friends and family, Samsung sponsored smart technology that kept the contestants up to date and well connected.

Keep an eye on our social media pages for more information on when our next search and auditions will be. 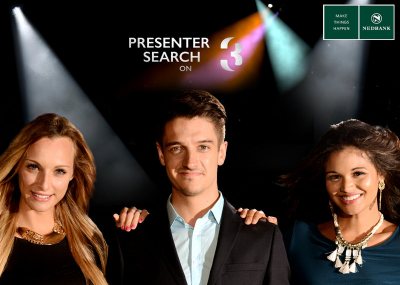